Hundreds of Minnesota lakes are infested with zebra mussels or spiny water flea, two aquatic invasive species (AIS) that have a significant impact on lake ecosystems. Researchers know both species reduce a lake’s zooplankton — an important food source for young walleye — but there is limited research on how that translates up the food chain to larger species, including Minnesota's favorite, walleye.

Researchers at the Minnesota Aquatic Invasive Species Research Center focused on studying nine large Minnesota lakes that are destinations for walleye anglers: Lake of the Woods, Rainy, Kabetogama, Vermillion, Red, Cass, Winnibigoshish, Leech and Mille Lacs. All, except for Red Lake, were at varying stages and combinations of invasion from spiny water flea and/or zebra mussel, with Mille Lacs being infested by both at the time of the study.

Armed with decades of data from the Minnesota Department of Natural Resources (DNR), the researchers used fishery sampling information to explore the lengths of 50,012 walleye and 176,983 yellow perch. In the early years, none of the lakes were invaded by zebra mussel or spiny water flea, thus providing an excellent source of data to show how these invasions affected the fish.

In their first year of life, the walleyes were 12 percent smaller in the presence of spiny water fleas and 14 percent smaller in the presence of zebra mussels as compared to walleye in uninvaded lakes. Growth of young walleyes in Mille Lacs Lake was particularly stunted. Slower growth makes it more difficult for baby walleye to survive over winter.

Significantly, this study is one of the few to show effects of AIS on high-level fish such as walleye, but more research is needed to determine if zooplankton causes this decrease. Notably, yellow perch, which rely more heavily on high levels of zooplankton in lakes, did not show the same decrease in size. Other causes could include increased water clarity and temperature in the presence of AIS reducing walleyes preferred habitat, a possibility that has spawned several additional collaborative studies.

In Minnesota, walleye is king! As the state’s official fish, management and stocking of this vital Minnesota native has been a key issue for the DNR for decades. It is not only a favorite of anglers but is also a cornerstone of the northern Minnesota tourism industry. Because of its popularity as a game and food fish, the walleye now occupies about 1,700 lakes totaling 2 million acres, and 100 warm-water streams totaling 3,000 miles, and accounts for about one third of Minnesota’s annual fish harvest. Each spring the DNR hatches millions of walleye eggs and releases tens of thousands of tiny fry and fingerlings into Minnesota lakes as part of their walleye management and stocking program. This massive effort costs more than $3.5 million per year. Quantifying how AIS are disrupting the walleye food web will allow managers to set realistic goals and implement policies that could improve the fisheries in the long term. 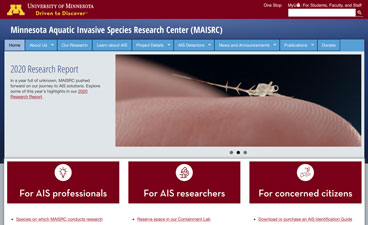 The Minnesota Aquatic Invasive Species Research Center brings together a wide variety of researchers, managers, and stakeholders to identify research priorities, conduct research, and implement solutions. Learn more about our team, our partners, and our plans for the future here.