Colony collapse disorder (CDD) is a threat to the survival of honey bees and could significantly disrupt agricultural production. CCD research into how pathogens and toxic compounds affect honey bees is a rapidly expanding field. However, this research is limited by the lack of in vitro cultures composed of honey bee cells. Instead, researchers must use valuable whole organisms (bees) or colonies, limiting the progress and studies that can happen.

To address this limitation, UMN researchers at the Bee Lab and the Department of Entomology set out to develop a honey bee cell line that would support continuous culturing of the insect cells in order to develop a powerful tool to explore the process of infection and the negative impact pathogens may have on honey bee biology and health.

In 2013, the team reported they had successfully established a cell line (AmE-711) with potential application for studies aimed at honey bee development, genetics, pathogenesis, transgenesis and toxicology. AmE-711 was established from embryonic tissues, and is characterized as adherent, fibroblast-type cells. Cells from the line are mainly diploid by karyology — similar to honey bee workers in nature. Most importantly, the cell line is continuous, meaning the cells remain viable and replicate for over 50 generations, translating to more than a year of culture in the lab. As a demonstration of the utility of the line, the team conducted experiments to show AmE-711 cells are susceptible to infection with the emerging fungal pathogen, Nosema ceranae, and honey bee viruses, which are contributing factors to honey bee decline.

Since its release, the Apis mellifera-derived AmE-711 cell line has served as a powerful tool for studies of host-pathogen interactions and toxicology in honeybees at the University. Notably, in 2015 the line crashed, possibly because of virus infection, but has since been recovered from liquid nitrogen stocks and adapted for growth using a commercially available medium. It is now licensed to other Universities, public institutes and private companies as the only continuous honey bee cell line available for research and experimental testing.

Through their pollination services, honey bees serve an essential role in sustaining the nutrition, health, and shelter of humans and other animals. Unfortunately, many factors commonly found throughout the U.S. can detract from honey bee health. To better understand the interaction between intracellular pathogens and honey bee cells, we need tools that allow examination of infection at fine resolution and under controlled, aseptic conditions. One such tool is cell culture, which has been instrumental to advances in medicine, including better understanding the effects of cancer, viruses, toxins, genes, radiation, nutrition and developing vaccines. With the AmE-711 cell line, a new door into honey bee research has been opened and there is huge potential for developments that can help us better understand why bees are dying and how we can help protect them. 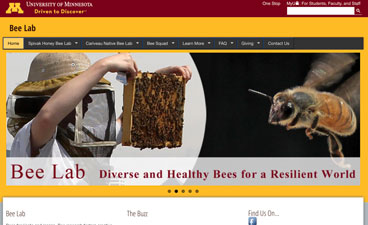 The Bee Lab's mission is to promote the conservation, health, and diversity of bee pollinators through research, education, and hands-on mentorship.