The United States is the global leader in food waste, with Americans discarding nearly 40 million tons of food every year with most of it going to landfills. Anaerobic digesters show real promise in helping to deal with excessive food waste while also creating new renewable energy resources.

Unlike traditional composting, which takes place aerobically and only captures solid nutrients allowing methane and carbon dioxide to escape into the environment, anaerobic digesters use a system of airtight tanks containing communities of microbes to break down organic waste. As the microbes “digest” the waste, they create a mixture of methane and carbon dioxide, known as “biogas,” which can be collected to use as a fuel. The microbes also produce heat and leave behind solid matter rich in nutrients like nitrogen, phosphorus and potassium that is ideal for use as a fertilizer and other soil amendments.

Previously, UMN researchers developed an anaerobic digester that handled another kind of waste — pig manure — but Twin Cities-based food bank Second Harvest Heartland was interested in seeing if such a system could help with the 1,500 tons of food waste, they discard to the tune of $200,000 annually. To make the process suitable for application at Second Harvest, the research team refined the initial design so it would work with a variable waste stream, with a minimal need for water, and with a bio-electrochemical system that removes adverse odors. They also did an economic analysis to determine whether a digester would make dollars-and-cents sense for Second Harvest, which aims to put every extra penny into helping allay hunger and reduce food waste.

With funding from the MnDRIVE Bioremediation program, UMN researchers set up a pilot scale anaerobic digester in the parking lot of Second Harvest’s Brooklyn Park facility. The system included connecting a first-stage solid-state digester and second-stage liquid digester and it ran for months.

Preliminary economic analysis of the data shows the digester will offset over 70 percent of the heat and power needed to run the Brooklyn Park location. Additionally, food-waste loading for the two-stage system increased by 33.3 percent compared to the conventional one-stage dry digester system.

Spoiled food, manure, sewage — while many just see items to dispose, UMN scientists see the potential to turn organic waste into heat, energy and fertilizer and in doing so, create a greener economy in Minnesota. Anaerobic digesters are popping up in more and more locations throughout the state, including wastewater treatment facilities, farms and food waste facilities. They show real promise to not only create renewable resources, such as renewable natural gas — thus reducing costs and increasing profits for the facilities — but they also reduce the amount of greenhouse gases in the atmosphere. 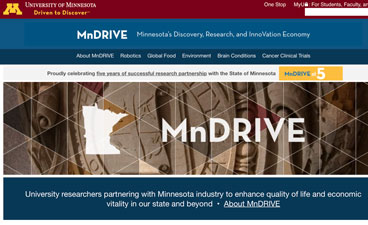 MnDRIVE—Minnesota’s Discovery, Research, and InnoVation Economy—is a partnership between the University of Minnesota and the State of Minnesota that aligns areas of research strength with the state’s key and emerging industries to address grand challenges. Launched a little over five years ago, MnDRIVE receives $22 million annually from the state to support research in five strategic areas Robotics, Global Food, Environment, Brain Conditions, and Cancer Clinical Trials.