Use of cannabidiol (CBD), the major non-psychoactive compound in cannabis, is on the rise across the United States. Pregnant women in particular may view CBD as more “natural” than other remedies for concerns such as nausea and pain, but the consequences of use for the developing fetus are unknown.

Previously, federal regulations prevented the study of cannabinoids and other illicit drugs, which made it difficult or even impossible to study the effects of these types of compounds. Notably, the FDA advises against the use of CBD, tetrahydrocannabinol, and marijuana during pregnancy or while breastfeeding, yet marijuana use during pregnancy is on the rise, likely because of perceived limited risks and changing social norms.

A team of researchers at the UMN set out to close knowledge gaps related to long-term CBD safety and impacts by conducting a first-of-its-kind lab study on mice. The team began by using a human-relevant dose that is typical in adults purchasing CBD over the counter for a variety of ailments. Next, they treated pregnant mice daily throughout pregnancy and lactation until they weaned the pups. They studied the offspring who were abstinent into adulthood (equivalent to 20-year-old humans) with no additional CBD. In these perinatally exposed adults they looked for persistent behavioral and molecular impacts of CBD. Specifically, the team investigated mice memory function and anxiety behavior along DNA methylation, an important mechanism known as an epigenetic mark in both rodents and humans that helps control gene activity. CBD’s effects on gene activity markers were examined throughout the genome in two brain regions important for memory, mood and cognition.

Maternal CBD treatment shifted gene regulatory marks (DNA methylation) at hundreds of genes in the brains of adult female offspring who were exposed to CBD in the womb and during early life. The results showed long-lasting changes to adult cognitive (thinking) and affective (feeling) behavior, despite not being exposed to CBD since they were infants. The team also found increased anxiety and improved memory performance in adult female offspring, while males were unaffected. CBD exposure also shifted gene regulatory marks that affect the formation of new neurons and synapses, communication between neurons, and diseases like autism spectrum disorder, epilepsy, and substance use disorder.

Scientists already know that epigenetic marks are involved in memory and mood, but this study is the first to show that CBD can affect these marks. While CBD may have beneficial effects in adults, these initial findings encourage caution regarding women using CBD in large doses during pregnancy and nursing, as compounds like CBD and THC can easily cross the placenta and be in breastmilk. Next, the team plans to broaden this research by exploring CBD’s impact on mice’s adolescent development.

Analysts predict the CBD industry will be worth over $20 billion by 2022. CBD presents the U.S. with unique potential in public health and business, and a good deal of political, medical and legal confusion. Amongst this confusion there is an opportunity for public research to step in and fill some knowledge gaps. This study shows the impact of CBD during development and uncovered effects on the brain and behavior and will help provide better guidance for women, health care providers and regulators, and provide a roadmap for future research. 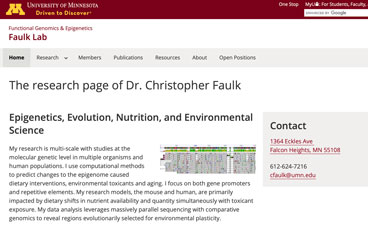 The Faulk Lab are focused on finding ways to identify environmentally induced epigenetic changes arising from dietary or toxicological exposure in early development that result in lifelong health consequences.