Chronic Wasting Disease (CWD) is a highly transmissible disease that affects cervids. The disease is 100 percent fatal, and it can take months for infected animals to show symptoms while, in the meantime, they spread the disease by shedding prions into the environment which can remain infectious for years, putting other animals at risk. Limited knowledge about CWD’s movement through the environment inhibits prediction of CWD transmission and risk in Minnesota and beyond.

Over the last two years, researchers at the UMN have been working with several Minnesota agencies to facilitate surveillance and enhance our understanding of the risk for CWD spreading — a key concern for Minnesota legislators. In Minnesota, these partners include the Minnesota Department of Natural Resources (DNR), Minnesota Board of Animal Health (BAH), Minnesota Department of Agriculture, Minnesota Pollution Control Agency, several tribal natural resources agencies around the state and Extension specialists.

One significant result of this effort is the creation of the Minnesota Center for Prion Research and Outreach (MNPRO), which has brought together an interdisciplinary team of researchers from across the University to share knowledge and insights related to CWD management strategies amongst themselves, stakeholders, other researchers and the public. Center collaborators are developing new CWD diagnostic tools, education and outreach materials focused on reaching Minnesota’s diverse hunting communities, and novel studies to explore various risks to humans and other animals posed by CWD.

One noted difficulty with CWD management elsewhere in the U.S. and Canada has been the difficulty in bringing together all the diverse voices and stakeholders. MNPRO’s effectiveness is built on coordinated communication that respects social values of diverse communities affected, collaborations in community-centered science and the engagement of influential federal and state policymakers. UMN researchers working on CWD diagnostic efforts and education have already connected with more than 7,000 members of the public via in person and virtual outreach, despite a global pandemic. Notably, this effort is also in coordination with a new multi-state research project that will help align research and management across jurisdictions.

Another significant outcome of MNPRO’s research effort is the development of novel CWD diagnostic tools. Thanks to funding from the Minnesota legislature and the Minnesota Agricultural Experiment Station, the MNPRO research team has successfully developed technologies capable of identifying CWD-positive animals in less than 24 hours and using field-deployable equipment. In early March of 2021, MNPRO researchers worked with the Minnesota DNR to successfully test a field-deployable CWD test in southern Minnesota, where CWD is circulating in wild white-tailed deer. This achievement was made possible by a transdisciplinary research effort at the University of Minnesota.

Since 2002, over 90,000 wild deer have been tested for CWD in Minnesota, with the first positive test appearing in 2010. It now has a foothold in southeastern Minnesota and is threatening the state’s billion-dollar hunting industry. The DNR conducts intense, concentrated surveillance in areas around known positives (both within a captive cervid farm or near our neighboring states’ borders) for a minimum of three years after an infection is discovered to ensure the disease has not transferred to wild deer in Minnesota, following our State’s CWD response plan. Additionally, cervid farmers across the state are part of the BAH’s management program that includes mandatory CWD testing. However, as CWD becomes more prevalent, concerns grow about it crossing over and affecting other animals and even humans. Comprehensive research and collaboration across stakeholder groups, states and jurisdictions is as essential to the management plan as developing novel prion detection methods and understanding the complicated ecological factors in the spread of CWD. 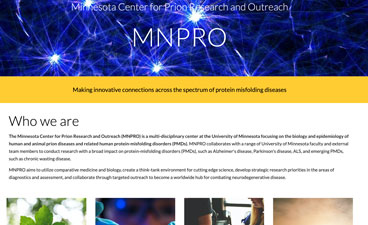 The Minnesota Center for Prion Research and Outreach (MNPRO) is a multi-disciplinary center at the University of Minnesota focusing on the biology and epidemiology of human and animal prion diseases and related human protein-misfolding disorders. MNPRO collaborates with a range of University of Minnesota faculty and external team members to conduct research with a broad impact on protein-misfolding disorders, such as Alzheimer's disease, Parkinson's disease, ALS, and emerging PMDs, such as chronic wasting disease.