With funding from the MAES Rapid Agricultural Response Fund, University of Minnesota researchers at the Minnesota Center for Prion Research (MNPRO) have developed a novel approach to field testing chronic wasting disease (CWD).

University of Minnesota researchers at the Minnesota Center for Prion Research (MNPRO) have developed a novel approach to field testing chronic wasting disease (CWD). The team confirmed their findings in southeast Minnesota the week of March 8, 2021, making them the first-ever scientists to successfully deploy a CWD field test.

There are limited testing options available for CWD, leading scientists to investigate several new approaches with the hopes of obstructing the disease’s spread. Last spring, the MNPRO team worked with the Minnesota DNR to analyze tissue samples from CWD-positive white-tailed deer using a technique known as RT-QuIC. The team managed to obtain confirmation of protein-misfolding in just nine hours with that approach. Only a handful of labs currently have access to this top-of-the-line technology for CWD testing.

Now, the MNPRO researchers have developed a new assay that generates a color change of red for a positive CWD result and blue for negative. They have named the test “MN-QuIC” to honor the state of Minnesota, where the test was developed.

“MN-QuIC uses nanoparticles to identify CWD prions in tissue samples. It is the product of an intense multi-disciplinary research effort that united scientists across the University of Minnesota,” says Peter Larsen, PhD, assistant professor in the Department of Veterinary and Biomedical Sciences at the University of Minnesota College of Veterinary Medicine (CVM) and co-director of MNPRO. He says the new test is also a lot cheaper than those using traditional equipment and uses field-deployable equipment to garner preliminary results in just 24 hours. “We have performed over one hundred confirmatory tests in our MNPRO lab and this was our first field-deployment. We will continue to validate MN-QuIC over the coming months and plan additional field deployments this fall.”

The team is striving for a test that could be set-up at individual stations statewide, cutting down on testing bottlenecks. “This would help prevent CWD prions from entering our food supply,” Larsen says, “and would be an important step forward in the fight against CWD.”

CWD originated roughly 50 years ago and affects white-tailed deer, mule deer, red deer, sika deer, caribou, reindeer, elk, and moose — all animals known as “cervids.” The transmissible neurological disease produces small lesions in an animal’s brain and ultimately results in abnormal behavior, weight loss, loss of bodily functions, and death. While it is yet unknown whether the disease can spread to humans, the Centers for Disease Control and Prevention recommends against eating meat from CWD-infected animals. In 2020, both the Food and Drug Administration and the U.S. Department of Agriculture declared CWD-positive venison unfit for human or animal consumption, listing the meat as an adulterated product.

CWD is spread by misfolded prion proteins, which also cause scrapie in sheep, bovine spongiform encephalopathy in cattle (sometimes called “mad cow disease”), and sporadic Creutzfeldt-Jakob disease in humans. CWD-causing prions are not alive and can only be destroyed with specialized equipment or strong chemicals, which is what makes CWD so difficult to mitigate. They can also persist in the environment for years. Advances made on CWD could inform other prion-related diseases in humans and animals alike.

The field team was composed of Larsen; Peter Christenson, a graduate student in the UMN College of Science and Engineering who envisioned this new testing method; Manci Li, a PhD student in the CVM; Marc Schwabenlander, MPH, chronic wasting disease research program and outreach manager at MNPRO; and Tiffany Wolf, DVM, PhD, assistant professor in the Department of Veterinary Population Medicine at the CVM and co-director of MNPRO. The scientists also spent the trip collecting environmental samples from areas impacted by CWD and connecting with partners in nearby Amish communities to identify culturally-appropriate CWD management strategies.

“This project is a shining example of bringing bipartisan support in the legislature, scientists, state agencies, and private landowners together to find solutions that support everyone’s needs,” Larsen says. “This is exactly how a land grant institution should function.”

This research was supported by the MN Agricultural Experiment Station Rapid Ag Response Fund and Environment and Natural Resource Trust Fund, as recommended by the Legislative-Citizen Commission on Minnesota Resources. Additionally, various entities at the University of Minnesota have provided support, including the CVM’s Department of Veterinary and Biomedical Sciences, the Office for the Vice President of Research, and the College more broadly, which also houses MNPRO. The research team works closely with the Minnesota Department of Natural Resources on multiple aspects of CWD research. 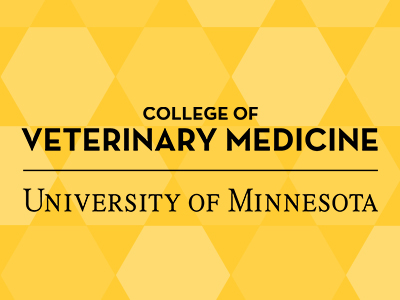 The Minnesota Center for Prion Research and Outreach (MNPRO) is a multi-disciplinary center at the University of Minnesota focusing on the biology and epidemiology of human and animal prion diseases and related human protein-misfolding disorders (PMDs).