Dairy cows have a two-month ‘dry period’ when they are not milked, allowing time for the cow and her udder to rest and regenerate between lactation cycles. During this period, the udder is especially vulnerable to infection by bacteria, causing mastitis. Mastitis remains one of the most significant diseases of dairy cattle. Historically, to deal with this threat, dairy farmers have used blanket dry cow therapy (BDCT) which involves infusing long-acting antibiotics into the mammary gland of all of their cows at dry off, to cure existing infections during the period between lactation cycles, regardless if they have contracted an infection. This not only increases costs for farmers but leads to increased antibiotic use.

Over the past five years, UMN researchers in the College of Veterinary Medicine are spearheading a project that selects cows for dry cow therapy. Selective dry cow therapy (SDCT) is an approach whereby only those cows or quarters with a known or suspected intramammary infection are treated with antibiotics at dry off.

The team compared two SDCT approaches (Culture-based or Algorithm-based) against BDCT in a multi-herd, multi-state clinical trial. They collected data on 1.) reduction in antibiotic use at dry off, 2.) intramammary infection dynamics during the dry period, and 3.) subsequent lactation performance, including clinical mastitis risk, milk yield and somatic cell count (SCC) in the first 120 days in milk.

The findings were incorporated into Extension guidance for dairy teams, and Extension provided online guidance to dairy farmers that was informed by this research.

Results showed the two SDCT approaches each reduced antibiotic use at dry off by an average of 55 percent, while causing no negative impacts on intramammary infection dynamics during the dry period or future lactation health and performance. Roughly 1/3 of all antibiotics used in the dairy industry are used for dry cow therapy, and by using this SDCT method farmers can significantly reduce their usage.

An economic analysis showed an estimated positive economic return with either SDCT program. Specifically, the average cost savings for producers employing SDCT was $2.13 per cow with the culture-guided system and $7.83 per cow using the algorithm method. If a single herd of 1,000 cows was tested with the algorithm method, nearly $8,000 would be saved in one year. An app is now available that allows producers to estimate the economic savings they may get if they adopt SDCT on their farm.

While not all farms are good candidates for SDCT, having this as an option is still beneficial for many farms. The research team has worked closely with UMN Extension dairy educators to develop recommendations for farms and has partnered with the Minnesota Dairy Herd Improvement Association (DHIA) to roll out the program. The DHIA is providing dairy farmers with information on the SDCT program and individual farm level reports on which dairy cows are at high or low risk for infection to guide antibiotic treatment decisions at dry off. This latter partnership will reach approximately 50 percent of Minnesota dairy farmers. By examining historical DHIA records (April/May, 2020), the team determined that approximately 60 percent of Minnesota dairy farms on a regular DHIA SCC testing program are potential candidates for adopting SDCT. Within these herds, about 10,043 cows would be eligible to avoid being treated with antibiotics at dry off in April and May (2020) alone. Similar programs are being rolled out by project collaborators at Cornell University to dairy producers in New York State.

As of 2019, Minnesota ranks seventh for the most dairy cows in the nation and it is important for the dairy industry to remain a viable and healthy agricultural sector of the state. Over the last few decades, advances in treating and preventing mastitis (including use of teat sealants and availability of rapid tests) mean that BDCT is no longer necessary for many herds. Adopting SDCT can result in ensuring animal health, production and wellbeing, and improved economic sustainability for U.S. dairy producers, while significantly reducing antimicrobial use on U.S. dairy farms — an issue that is increasingly causing public concern. In short, it is a win-win-win for the dairy industry. 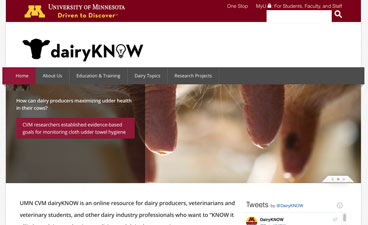 UMN CVM dairyKNOW is an online resource for dairy producers, veterinarians and veterinary students, and other dairy industry professionals who want to “KNOW it all” about dairy production medicine and dairy best practices.