The ability to alter DNA sequences in living cells makes possible detailed functional analysis of genes and genetic pathways. In plants, targeted genome modification has applications ranging from understanding plant gene function to developing crops with new traits of value. Being able to modify DNA in living cells is revolutionizing the life sciences.

One key initiative of the CPPG is to develop a simple biocontainment strategy to prevent gene flow into, or out of, GE crops. Their novel approach is to engineer Synthetic Genetic Incapabilities (SGIs) between GE organisms and their non-modified counterparts that prevent gene flow bi-directionally by utilizing a recently developed CRISPR tool for controlling which genes are turned on in a cell.

In 2012, Science named TALEN® as one of 2012’s top scientific breakthroughs. It has been licensed to several companies including Calyxt, a startup company that uses TALEN® for precision targeting of existing genes within a plant’s genome, thus allowing scientists to select desired characteristics, accelerating breeding in a fraction of the time. The first TALEN® developed crop, a high-oleic soybean, entered Midwest fields in 2018 and was planted on over 72,000 acres in 2020.

Researchers at the CPPG also recently developed an alternative method for genetically modifying legume species that is efficient and doesn’t require technical skills such as traditional tissue culture. The latter opens up the door for small agricultural firms to get involved with developing GE crops and has been successfully applied to achieve expedited genetic transformation in soybean plants.

As GE organisms continue to gain market share and be applied to more and more applications, the ability to limit unintended spread of transgenes into wild organisms is critical. Notably, researchers with the CPPG are not only involved in developing Engineered Genetic Incompatibilities to prevent unwanted spread of transgenes from GMO crops but are also involved in studies related to using GE to control invasive species. Currently, they are testing their technique in model monocot and dicot plants for transgene containment but have plans to move into crops in the near future.

The telltale sign of any transformational technology is how quickly researchers apply it to their own scientific problems. By that standard, CRISPR (whose developers received the 2020 Nobel Prize in Chemistry) ranks among the most powerful additions to biology’s tool kit in the past half century. CRISPR, and other gene-editing tools like TALEN®, allow scientists to alter an organism’s genome with unprecedented precision. Both easy to use and inexpensive, it has the potential to put powerful genetic-modification capabilities into the hands of small agricultural firms, rather than big agribusinesses. Proponents say it is less biologically disruptive than traditional plant-breeding techniques practiced for thousands of years. With gene editing, scientists are simply using science to accelerate the process and develop crops that have the best, most desirable traits possible — and unlike GMOS, contain no foreign DNA in the final product — while also considering the long-term implications of their work. 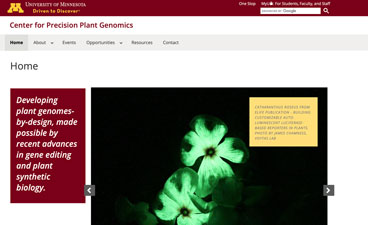 The University's Center for Plant Genomics has a mission to develop genomes-by-design by enabling plant functional genomics and harnessing plant metabolism.