Pandas are one of most beloved and most endangered animals on the planet. Inbreeding and relatedness in wild panda populations are important parameters for panda conservation. Habitat loss and fragmentation are expected to increase inbreeding but the actual inbreeding levels in natural panda habitats have remained largely unknown.

What has been done

Using methods of genetic analysis often used for livestock species, animal science researchers at the University of Minnesota applied their technique to analyze wild and captive panda populations in China. Their study revealed that wild pandas from the four largest habitats were genetically unrelated and most pandas from 200km apart shared no common ancestral alleles. However, the Qinling wild panda population, which is known to have habitat loss, and the Linagshan wild panda population both had high levels of inbreeding.

The results provide a genomic quantification of the actual levels of inbreeding and relatedness among pandas in their natural habitats, provide genomic confirmation of the relationship between genetic diversity and geographical distances, and provide genomic evidence to the urgency of habitat protection. 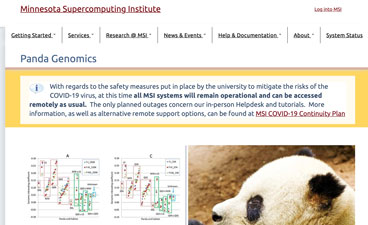 The Minnesota Supercomputing Institute provides advanced research computing infrastructure and expertise to the University of Minnesota research and scholarly community and the State of Minnesota.