Since 2016, the Minnesota Invasive Plants and Pests Center has helped fund a team of research and Extension soybean specialists to explore two ways to help Minnesota soybean farmers:

To date, one soybean line with aphid resistance has been developed and commercialized with Viking Seeds in Albert Lea, Minn. (Viking 0.0654AT). Nine additional lines are in advanced stages of testing. However, concerns persist that aphids could quickly adapt to resistance in the plant. Thus, the team is also exploring ‘stacking’ of multiple resistance genes to create a stronger, more robust resistance and also expanding their work to include food-type soybean germplasm.

Drone trial findings showed near-infrared reflectance decreased with increasing soybean aphid populations in caged trials when cumulative aphid days surpassed the economic injury level, and in open-field trials when soybean aphid populations were above the economic threshold (250 aphids per plant and/or over 80 percent of plants infested). These findings provide the first documentation of soybean aphid-induced stress being detected from UAV-based multispectral imagery and advance the use of UAVs for remote scouting of soybean aphid and other field crop pests.

The team is now working with UMN Extension to incorporate their findings into a patent-pending tool for decision-making about insecticide applications for soybean aphid to a broadly applicable, satellite-based platform. This tool could then help prioritize fields for ground- or drone-based scouting, or even enable decision making for individual fields.

Soybeans make up 30 percent of Minnesota’s total agricultural exports and remain the state’s top export commodity. In addition, the state ranked third in the nation for soybean production as of 2019. This research directly serves the agricultural community of Minnesota by advancing the development of aphid-resistant soybean cultivars and improving remote sensing technologies to locate damaging levels of soybean aphids. The resulting decreases in insecticide inputs will reduce adverse economic and environmental impacts of soybean aphid management and will be especially beneficial economically to organic producers who have few options for aphid management. 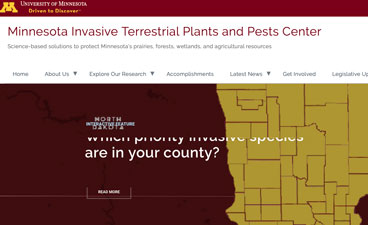